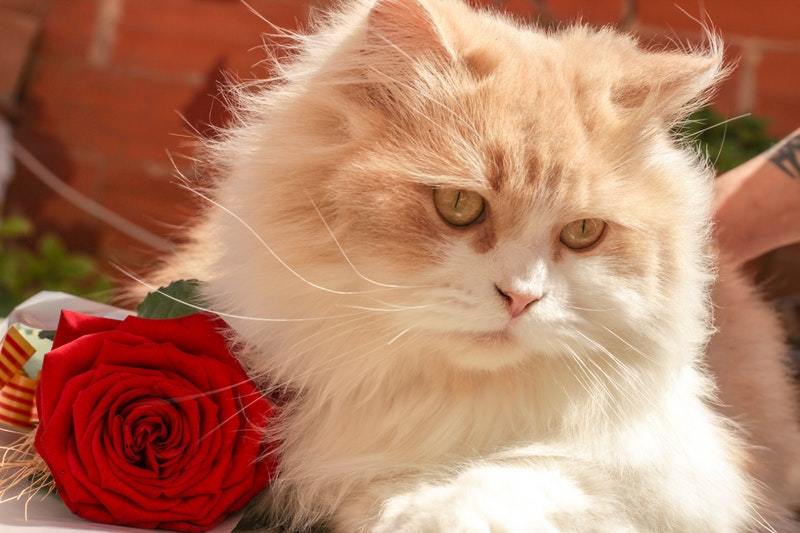 Think you know everything about Persian cats?

Read our list of 10 unique Persian cat facts to test your knowledge.

Can you name the famous historical figures who owned Persian cats? Do you know how much a popular painting of Persian cats sold for at auction?

Continue reading to discover these answers and other interesting facts about one of the world’s most popular cat breeds.

1. Persian Cats Can Be Seen in Egyptian Hieroglyphics

Persians are one of the world’s oldest cat breeds. Traders encountered the long-haired felines in Persia (modern day Iran) in the 1500s. The Persian’s beautiful coats and unique features fascinated the explorers. The cats were brought to different parts of the world, including Italy, England, and eventually America.

Although we can’t be sure of the Persian’s exact origins, we know that for thousands of years this unique breed has captivated people all around the world.

2. A Persian was One of the World’s Smallest Cats

You might think of Persians as one of the largest cat breeds. But in the 1990s, a small blue Himalayan-Persian was born that was believed to be one of the world’s smallest recorded cats.

Tinker Toy was a male blue-point Himalayan-Persian mix who was only 2.75 inches tall and 7.5 inches long as a full-grown adult.

3. Persians Have Been Owned by Many Famous Celebrities

Persian cats’ long coats, unique colors, and flat faces have attracted celebrity owners for hundreds of years. Among her many cats, Florence Nightingale had a large Persian named Mr. Bismarck and Marilyn Monroe’s cat Misou was a white Persian. The famous author and screenwriter, Raymond Chandler, was said to have read his first drafts to his own Persian cat.

This attractive breed was also popular with European royalty, like Queen Victoria. King Louis XV even owned a white Persian that was often seen walking across tables at the Palace of Versailles.

4. Persians Were Not Always Flat Faced

In fact, their distinctive scrunched features did not become popular until the 1950s when a genetic mutation caused a flat-faced litter of kittens to be born.

Since then, selective breeding has been used to continue producing this unique and striking look. However, owners know that the flat-faces present some challenges. These cats need their eyes routinely cleaned and they often have trouble breathing.

5. Persians Were Featured in the World’s First Cat Show

On July 13, 1871, the world’s first cat show was held in London’s Crystal Palace. Even in the 19th Century, people loved their cats and this show attracted over 20,000 visitors.

Persians were among the short list of breeds featured in this show. Today, Persians are still heavily featured in cat shows. Their long fur, distinctive faces, and attractive coats make them frequent award winners in modern shows.

6. One of the Most Expensive Animal Paintings Featured Persian Cats

42 Persians to be exact. The large canvas painting titled, My Wife’s Lovers, only depicted a portion of the heiress Kate Birdsall Johnson’s pets. She housed 350 cats in her Californian summer home.

The 227-pound painting was commissioned in 1891 and took three years to complete. The painting was recently sold at auction for $826,000. Yes, you read that right. Before being sold, the painting was displayed at the Chicago World’s fair and in a San Francisco salon.

7. A Persian Gave Birth to One of the Largest Litters Ever

Typical litters consist of two or three kittens. Occasionally you might see up to eight kittens in a litter.

But a Persian cat named Bluebell holds the record for one of the world’s largest litters. This Persian cat from South Africa gave birth to a litter of 14 kittens. She is recognized as having one of the largest litters with all of the kittens surviving. This is rare for a large litter, not to mention one with over ten kittens.

8. Persians Have Been Nicknamed “Furniture With Fur”

Due to their lazy nature, Persian cats received this appropriate nickname. They are a low-energy breed that prefers naps over hours of play. Persians are often seen lying in the same spot without moving for hours.

While they can be encouraged to play, Persian cats do not have the basic curiosity and playful nature seen in other breeds. However, since Persian cats love to cuddle and rest they make a great lap cat.

9. Persians Have Been Featured in Many Popular Films

Movie-buffs will remember seeing Persian cats in a variety of different films.

One of the most famous movie cats was a Persian owned by the Bond villain, Ernst Blofeld. This character was parodied as Dr. Evil in the Austin Powers series. Dr. Evil also owned a Persian cat, which was named Mr. Bigglesworth.

10. Persians Can Be an Expensive Breed

Breeders often sell Persians for $1000-$3000. Their age, pedigree, facial features, and coloring can drastically change the price. Pedigree is important for cat shows, which is why this breed comes with a hefty price tag. Flat-faced white Persians are often the most expensive cat in this breed.

If you are interested in owning a Persian at a lower price, avoid purchasing a kitten. Younger cats are often $200 more than their older counterparts. Since this breed has a substantial lifespan (around 12-17 years), you will still have a loving feline friend for a long time.

To learn more about Persian cat prices, you can find our article here.

Persians are a beautiful breed with a unique history. Their distinctive features, long coats, and lazy nature make them a popular and desirable pet.

Persians have been beloved pets for hundreds of years and their popularity is not slowing down. This attractive companion frequently wins awards at various cat shows. Although Persians can come with a high price tag, their cuddly and sweet nature makes them a favorite among cat owners.

If you are interested in learning more about owning a Persian, check out our article “5 Things to Consider Before Buying a Persian Cat”.