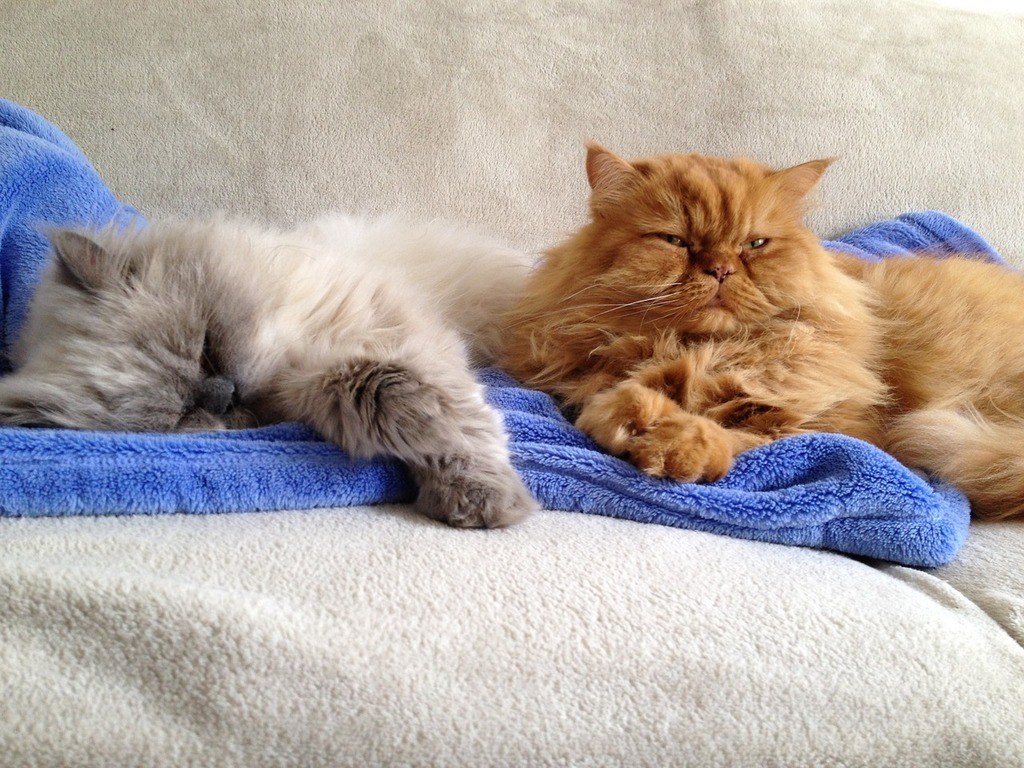 Surprisingly, the answer is no.

I know this might shock some cat owners. We’ve been told this myth for years. And our furry friends do enjoy sleeping the day away. But, domesticated cats are, in fact, not nocturnal. They are crepuscular.

Don’t worry if you’ve never heard the term “crepuscular”. We will discuss all things nocturnal and crepuscular in this post. Basically, it means animals (like cats) that are most active during dawn and dusk.

Ok, once the shock wears off that domesticated cats are not nocturnal, continue into this post to learn more about what they actually are: crepuscular.

What Exactly Does Crepuscular Mean?

Ok, so now you know that domesticated cats are not nocturnal. But what exactly are they?

Domesticated cats are considered crepuscular creatures. They are most active during twilight hours (dawn and dusk). Generally, animal waking hours are based on prey availability. So, over time, crepuscular animals adapted their hunting patterns to the times they most successfully caught prey, which happened to be in the low light of dawn and dusk. And although domestic house cats don’t traditionally hunt, they are often fed in the morning or evening (adding to their crepuscular nature).

What is the Difference Between Crepuscular, Nocturnal, and Diurnal?

Alright, let’s take a step back. What is the difference between crepuscular and nocturnal? And what does it mean to be diurnal?

Nocturnal animals are active at night and sleep during the day. These animals have adapted to the darkness. They often have large eyes that allow them to see better in low lighting. Some have enhanced senses of hearing and smell, which allows them to hunt in the dark. Nocturnal animals include owls, mice, tigers, and beavers.

Diurnal animals are just the opposite. They are awake during the day and sleep at night. Sound familiar? Humans, of course, are diurnal. However, for social or cultural reasons, humans can adapt and become temporarily nocturnal. Squirrels and songbirds are more traditional diurnal creatures that are always awake during the day and asleep at night.

Crepuscular animals are active during twilight. Although they are often mistaken for nocturnal animals, these creatures are most active at dawn and dusk. This waking pattern is related to their feeding patterns. Some animals adapted to the crepuscular cycle to avoid hunting during the hottest part of the day. Others, to avoid competition with other predators. Crepuscular animals include domesticated house cats, rabbits, and skunks.

Are All Cats Crepuscular?

Nope! In this post, I am specifically talking about domesticated house cats. Our pampered pets have adapted to the crepuscular lifestyle. But feral and wild cats are still considered nocturnal.

This really all boils down to hunting patterns. Wild and feral cats hunt at night. Although they don’t have night vision, they can see well in low lighting. By hunting at night, they can approach their prey closer than they could during the day.

House cats generally don’t need to hunt for their food. Their owners provide bowls of dry kibble and plates of wet food. And house cats are often fed in the morning or evening. So, they have adapted to this schedule and become crepuscular creatures.

However, house cats can further adapt to their owner’s schedules. It is not uncommon for a cat to stay awake during the day if their owner is always home to play with them. But, generally speaking, house cats are actually crepuscular and wild cats are nocturnal.

Why Do People Often Think Cats are Nocturnal?

It is very common for people to think that house cats are nocturnal. Many resources and websites even list cats as nocturnal. But this is actually misleading information.

However, it is understandable that people think cats are nocturnal. Wild and feral cats actually are nocturnal. Their sleep patterns are adjusted to their prey. So these cats sleep most of the day and hunt at night. Many people probably group all cats together and consider every feline nocturnal.

But house cats are not nocturnal. Even though they sleep a lot, they are actually crepuscular. But some people still think cats are nocturnal. This misconception probably comes from the fact that cats sleep 16 hours every day. So cats received their nocturnal reputation by sleeping a lot during the day.

But even though they sleep during the day, house cats generally also sleep at night. They are really most active during the morning and evening. So don’t let their daytime sleeping fool you, house cats are not nocturnal.

But My Cat Always Sleeps During the Day. Are You Sure They Aren’t Nocturnal?

Hence the myth. Yes, it is very common for house cats to sleep during the day. But it is just as common for them to sleep at night. That’s because cats sleep twice as much as we do. It is very normal for a cat to sleep 16 hours a day.

But even if they needed to hunt, house cats would still instinctively sleep during the day. This allows them to avoid hunting during the hottest part of the day.

And house cats can adapt to their owner’s schedules. So if you are home to engage your cat more at night, they will tend to use the day to rest.

What Should I Do If My Cat is Awake at Night?

Even though we now know that cats are crepuscular, some house cats seem to forget this. Yes, your cat might seem nocturnal at times. My cat has been known to sleep all day and sprint around my house all night long.

But don’t worry, it is possible to bring your cat back to the crepuscular cycle. Just remember, not every cat has the exact same schedule. Cats might wake their owner during the night if they are hungry or sick. If this is an abnormal experience, consider talking to your vet to determine if your cat might be sick.

If your cat is waking you up during the night, consider these tricks to discourage their nocturnal tendencies:

Why Do Cats Sleep So Much?

It can be easy to forget, but house cats descended from wild cats. I know, our pets are nothing like lions or tigers. But, they still have some wild cat instincts.

House cats also sleep because they are bored. If they don’t have stimulation, they will likely spend their time sleeping. If you want to encourage your cat to increase their activity level, try offering more stimulation. Leave toys around the house or open curtains so your cat can look out windows. These simple tricks will help your cat feel stimulated and have a reason not to sleep all the time.

Do Cats Have Night Vision?

Many people believe cats have night vision. This helps spread the myth that cats are nocturnal.

Technically, cats don’t have night vision. Contrary to popular belief, cats can’t see in complete darkness. But, cats can see in low lighting. In fact, since cats have more rods in their eyes, they only need ⅙ of the light that humans need to see.

You’ve also probably seen a cat’s eyes glowing. This is caused by their tapetum lucidum, not night vision. Some animals, including cats, have this extra tissue layer in their eyes. The tapetum lucidum reflects light, which causes their eyes to “glow” and helps them see in low lighting.

So, although cats don’t have night vision, they can see well in low lighting. This helps wild cats hunt at night. But cats can’t see in complete darkness.

So now, we’ve debunked two myths in this post. We’ve learned that house cats are not nocturnal and cats don’t have night vision.

When I first learned that house cats are crepuscular I was skeptical. I had always been told that cats are nocturnal. But once I thought about it more, it really made sense. And, in fact, my cat is always more active in the morning and early evening.

But if your cat is more active at night, consider trying the tricks discussed earlier in the post. You can help your cat adapt to your schedule.

Did you know that cats are crepuscular? What is your cat’s typical sleep schedule? Let us know in the comments below!

previousCan Cats Eat Dog Food?
nextWhy Does My Cat Sleep On My Pillow?